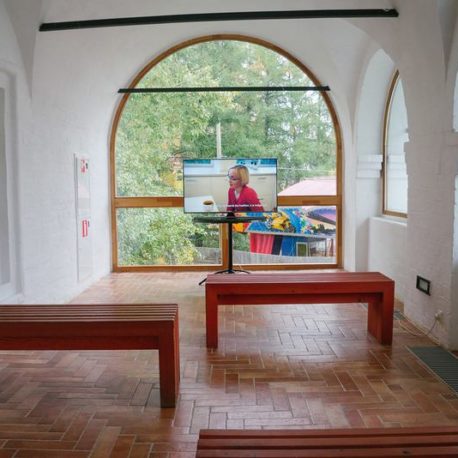 Video documentation of a project shot in Arkhangelsk with participation of local women having no substantial experience of folklore singing. We met with each participant, talked about the folklore singing tradition, chose a song based on her needs and feelings and sang it together. The traditional Russian culture viewed voice as representation of a person’s power. Singing once was part of everyday life of everyone. However, the life of a contemporary city inhabitant singing almost lacks, while according to psychologists and culture study experts singing offers healing possibilities to the body and soul. A The voice plays an important further role in building consciousness and developing a personality, which is confirmed by the fact that freedom of speech is one of the basic rights and freedoms in the contemporary world.

The city in this case acts as an antagonist of a folklore song. It’s a place with its own “song” – incessant city noise, rush, hurrying progress, which is often in conflict with the ecology of the non-urban world. At the same time, folklore songs may be viewed as making an intervention in the foreign territory of the city. The project is aimed at returning the freedom of voice to people in the direct and physical sense. We hope that through this practice the participants receive a possibility to locate a base within themselves (the basic technic of folklore singing is called singing “on a base”). The project is an attempt to research a possible symbiosis of the city and folklore songs. It is further aimed at the return of folklore singing as an accessible instrument of self-healing and self-identification for the wider parts of population.

The video is available here.