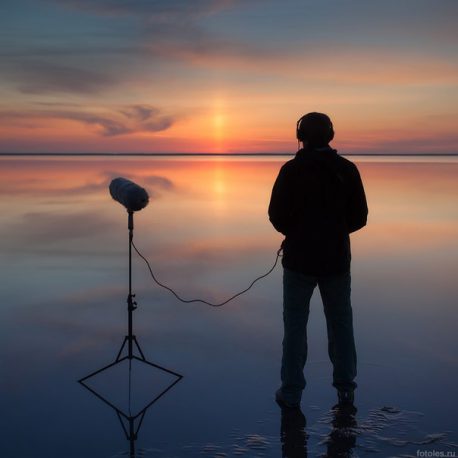 Is a sound researcher (Severodvinsk).

He completed Saint Petersburg University of Cinema and Television, and has been working as a sound engineer at Severodvinsk drama theater for 7 years. The knowledge about nature he got from his father who is a hunter at Mezen district of Akrhangelsk region. This knowledge he uses in his sound projects where he investigates the soundscape of the Russian North (Arkhangelsk, Murmansk regions and Karelia). He refuses to work with commercial cover production, as many of his colleagues do. Nikolay creates the sound history of the Russian North, in the similar way writers Mikhail Prishvin, Konstantin Paustovsky and Vitaly Bianki did – but he uses his professional instrument instead of text production.

“I go to the forest to get the sound in the same way people go there to get mushrooms”, Nikolay says. The project is an acoustic research of the Russian North, an attentive observation of its sound and the poetic re-thinking of it.